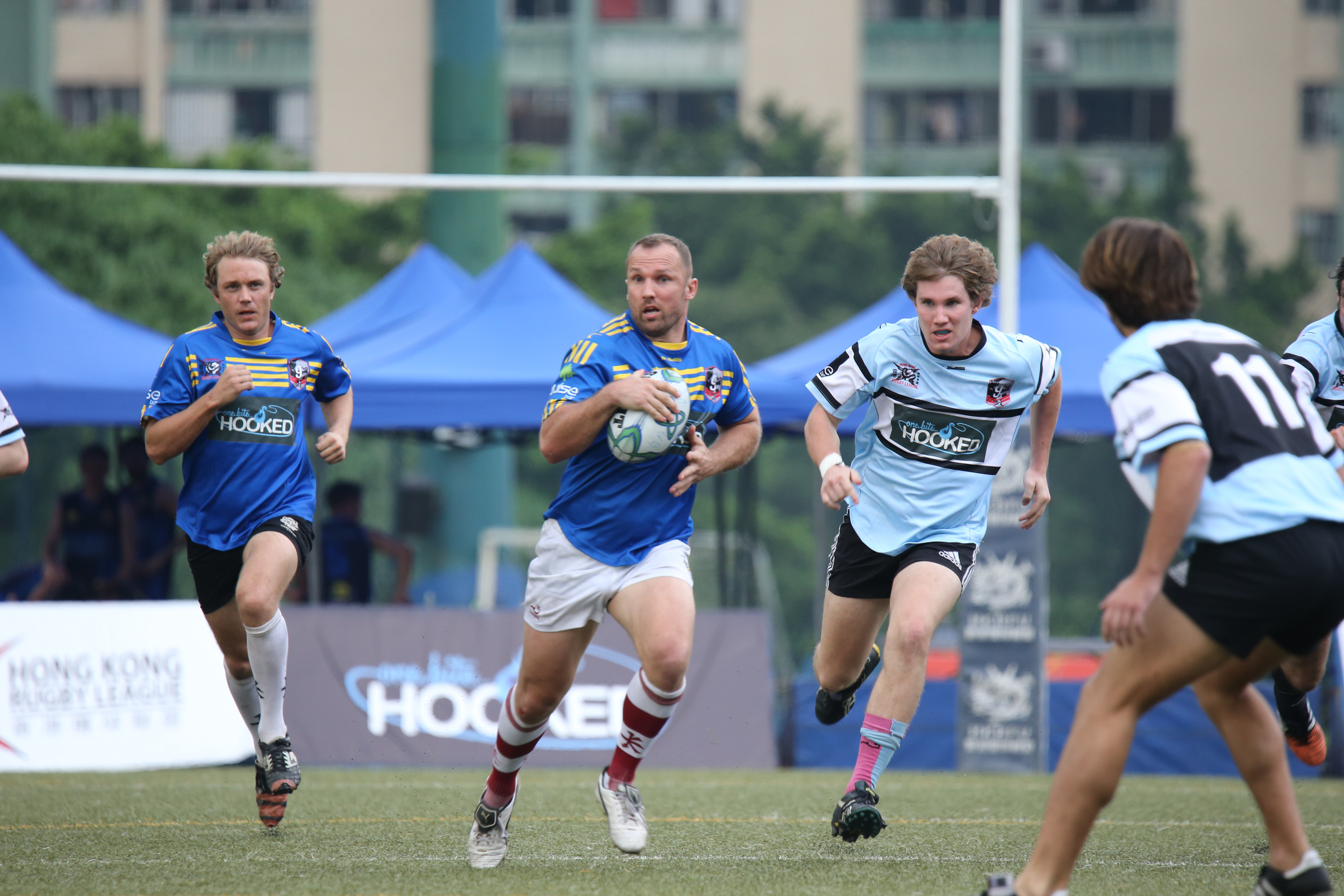 The first game of the day saw the Mong Kok Creepers take on the Wan Chai Warriors. The game got off to an explosive start as both teams looked to stamp their authority on the game early on. The Warriors made some good progress with ball in hand through their experienced halves, Kurt O’Brien at hooker and Tom Beresford at scrum half and with some decisive running from league convert Anson Chui. However, it was the Creepers who took first blood through captain Ian Molyneux. The game remained close at the start of the second half however, as the Creepers got in to the rhythm of their game plan they stretched ahead. Taking advantage of the platform laid by their big forward pack, with man of the match Hugh Quinlivan leading the way, to come out 28-10 winners.

Game 2 saw the Creepers back up well in the Hong Kong heat to take the second games against an experienced Hong Kong Hunters side. Their 25-11 victory secured their passage in to the final with forward Marco Baptista Roque from the Creepers taking man of the match in Game 2.

Next up was the Coastal Cobras, led by Jason Fairleigh, against the Hong Kong Hunters. In a highly entertaining game with both sides exhibiting good rugby league play the Cobras took advantage of the Hunters playing two games back to back. Instrumental standoff Mark McMillan took home the man off match in the Cobra’s 22-14 victory over the Hunters.

It was down to the Warriors to stop the final being an all Kowloon affair, with the Coastal Cobras looking for a second win to secure as spot in the final. In an extremely close fought game the two sides traded tries and big hits in the first half. After a barnstorming run from powerful Warriors forward Jaydon Hill, Warriors captain James Hall put a deft little grubber through the Cobras defensive line which gave forward Michael Beckett a try to take the warriors in to half time trailing by just 2 points. The second half was a different story however, as the Cobras’ forwards, shown the way by James Eason, laid a platform for the mercurial McMillan who once again took the man of match on the way to his sides 22-11 victory.

In what turned out to be the final game of the group stage and the battle to avoid the wooden spoon we saw the closest game of the day between the Wan Chai Warriors and the Hunters. This game gave rise to what some called the try of the tournament with life long league fan but first time player Dan Mascord taking a hit up 40m out, breaking the line and shrugging off the cover tackle to go over for a great solo try. Despite the efforts of Mascord and Doug Fluker, who went the length of the field on a kick off receipt, the lighter weight forward pack of the Warriors began to tire. This provided opportunities for the experienced Tommy Foily to take advantage of and claim the win and man of the match in the process. Jack Muir’s Hunters took the final group game 16-14 and with it 3rd place in the tournament.

With the Cobras and Creepers both guaranteed a final spot they elected not to play the dead rubber group game and take some extra time to prepare for the final.

After a cagey opening 5 minutes in which the two forward packs sized each other up it was the strong forward performances from Hugh Quinlivan, Patrick Kirkland and Dave Mitchell which once again did all the damage and helped the Creepers come out 17-4 victors to take home the first ever Hooked 9s title.

The Creepers were presented with the Hooked 9s trophy along with a generous bar tab thanks to sponsor bar Rula Bula. The Cobras’ Mark McMillan received the MVP award and free mouth guard courtesy of sponsors Amory Mouth Guards

Speaking afterwards, HKRL chairman James Hall hailed the day a success – “A fantastic day was had by all that participated, I was particularly delighted with the standard of play. It was clear that even the guys who hadn’t played Rugby League before had a natural affinity and understanding of how the sport is played. Congratulations to the Mong Kok Creepers and many thanks to our main sponsors Hooked”.

The tournament received a great reception from League players old and new with many first timers asking when they could play again.

Hall added, “We’re particularly enthused by the response from the players and spectators. We look forward to this being the first of many tournaments and growing this marvelous game of ours here in Hong Kong and Asia.”