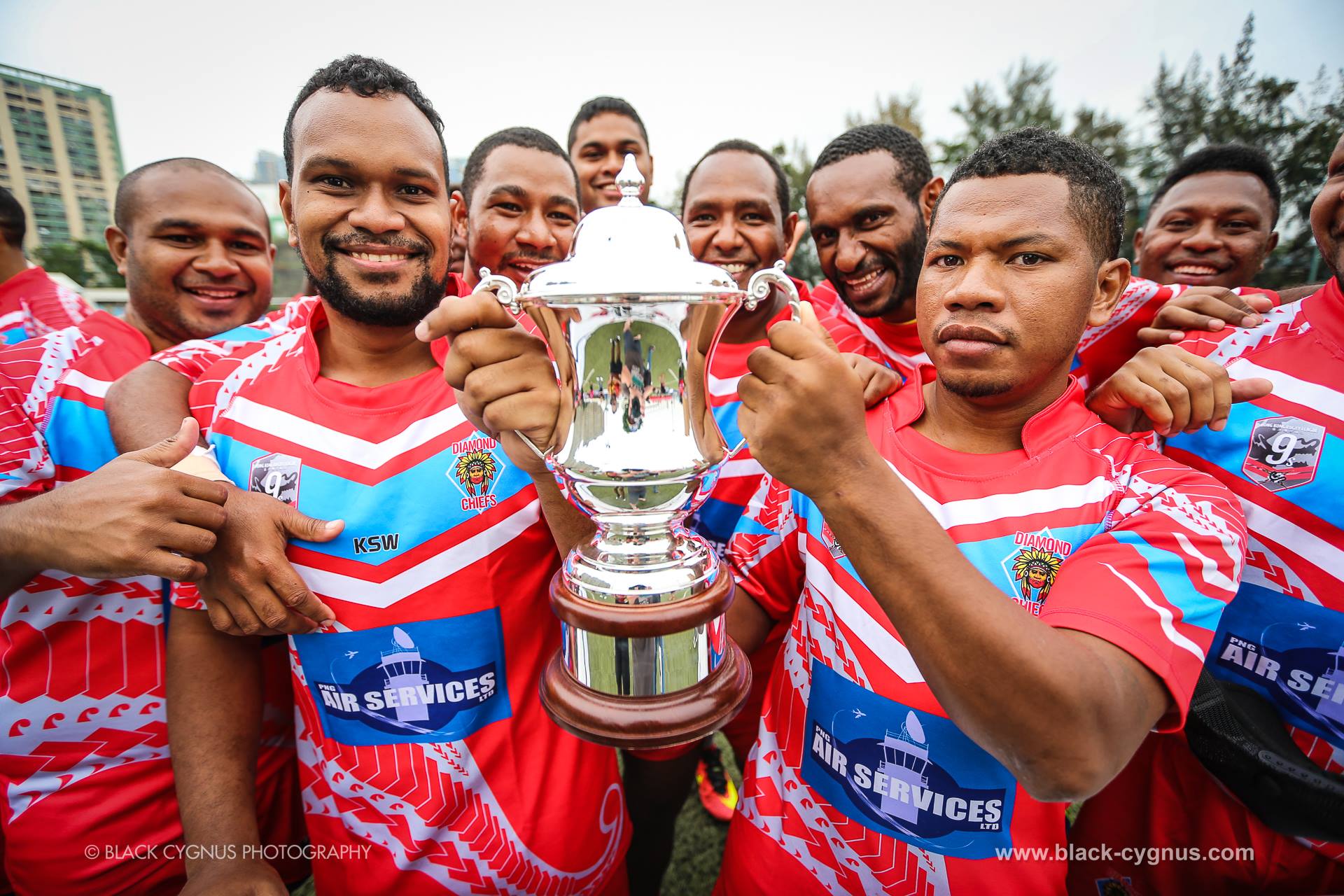 The Diamond Chiefs (Papua New Guinea) took home the James Hall Cup after defeating the Esarn All Stars (Thailand) 25-8 in a enthralling final at the 2017 ICG HKRL 9s.

For the first time ever, the HKRL 9s saw entries from two overseas teams and it was those two teams who proved to be the best on the day, emerging as the two finalists after a extremely competitive round robin group stage that saw all sides play against each other once. All teams lost at least once on the day, proving just how tightly contested this year’s tournament was. Of the Hong Kong based sides, the Valley Broncos were the strongest and finished third, losing narrowly only to the two finalists.

‘We saw some fantastic Rugby League on show today. It was a extremely competitive tournament this year with no sides pulling away and there were plenty of upsets,’ said HKRL President James Hall. ‘To think that this tournament is only in its third edition and is already attracting such strong interest from overseas is testament to the potential for Rugby League in Hong Kong and beyond. Today was a great day for the game and we can’t wait to see what the future holds for the HKRL 9s.’

You can catch up on the scores and match report below, or check out our Facebook page here to see all the photos from the day.

The first game of the day saw the Esarn All Stars, a Esarn representative side made up from the best of the RLXIII True Vision Cup 2017, take on the Wan Chai Warriors who were returning for a third consecutive year. The Warriors sprung one of the upsets of the day as they opened the tournament with a gutsy 15-14 victory, striking whilst the All Stars were still trying to find their feet. The second game saw the Valley Broncos take on last year’s finalist the HK Hunters, and despite the Hunter’s having the lion’s share of possession, a strong defense and clinical attack by the Broncos meant the Broncos won the game 29-7, with the Bronco’s Ilalio Misi wreaking havoc in attack and defense. The final game of the first round saw the Diamond Chiefs, led superbly by their captain Gabriel Chakumai, physically overwhelm the HK Scottish Reivers 23-0 as they sent out a warning message to the rest of the competition with a commanding win.

The second round pitched the Esarn All Stars against the HK Hunters. The All Stars were galvanized by their opening round defeat and started to execute their open, expansive game play effectively. Right from the kick off they moved the ball around their backline quickly and overcame a unsuspecting Hunters side with their pace 25-7. The next game saw two pre-tournament favorites battle it out in a hugely physical encounter, with the Chiefs taking on the Broncos. Both sides got an early score, with Broncos’ Ian Molyneux scorching down the wing to score from 60m out, but as the skies opened up and the rain lashed down, the game became a tight battle upfront. Although the Broncos defense held out for large portions of the game, they failed to keep hold of the slippery ball and conceded possession too easily early on in their sets allowing the Chiefs to control all the possession and territory. In the end, the Chiefs wore down the Broncos defense and secured the winning score, the game finishing 12-4. The final game of the round saw the Reivers sneak a victory against a combative Warriors side 16-14 thanks to some strong running from Adam Rowe and good game management from Rugby League veteran Jason Fairleigh. However, it was not before former Sydney Roosters Under 20’s star Toby Lei made his presence felt with some of the biggest defensive shots of the day for the Warriors, drawing audible exasperated gasps from the on-looking crowd on more than one occasion.

The Chiefs carried through their rich vein of form and impeccable defensive effort into their game against the Hunters with a 18-0 victory, whilst both the Broncos and the All Stars were really getting into their stride, posting the biggest victories of the day against the Warriors (36-0) and Reivers (32-0) respectively, with both teams moving the ball incredibly well and upping their pace of attack under the returning blue skies.

By round 4, the Chiefs were starting to emerge head and shoulders above the chasing pack and showed no signs of slowing down, grinding out a 14-0 victory against the spirited Warriors side. The following game looked increasingly like a battle for second place between the Broncos and All Stars. Both sides looked dangerous in attack all day and would ultimately end up as the tournament’s top points scorers. They lived up to the expectation as a lively start saw the All Stars take the lead twice only for the Broncos to level twice. Using their size advantage the Broncos began taking the game to the All Stars up-front, making plenty of inroads. However, a controversial intercept score as Valley were deep into All Stars territory effectively won the game for the All Stars with the final score being 28-16. The standout player was the All Stars’ Travis Clements, the Thailand international representative who had been dominating defenses all day with his aggressive carrying and scored 50m try here, charging over the Broncos defense. The final game of the round saw the Reivers again sneak a narrow victory with a 17-14 win against the Hunters, despite an impressive showing from HK Residents XIII reps Rob Hotchin and Mike Agahater who were the bright sparks in the Hunters’ side.

The final round began with an eagerly awaited game between the two overseas teams. The Chiefs had already qualified for the grand final whilst the All Stars needed a win to guarantee their spot. The game was a extremely tight affair with the Chiefs’ power and staunch defense coming up against the All Stars speed and blistering attack. With Clements once again coming to the fore leaving a trail of Chiefs defenders scattered on the floor, the All Stars moved the ball well in the Chiefs half and eventually found a way over the try line, becoming only the second team to do so all day. Despite some late pressure from the Chiefs the score remained 6-0 as the All Stars pulled of one of the upsets of the competition to book their spot in the Grand Final.

Elsewhere, the Hunters managed to pick up their first points of the tournament with a 8-8 draw against the Warriors, whilst another clinical performance saw the impressive Broncos finish the tournament on a high with a 16-7 victory against the Reivers. The Broncos held out wave after wave of Reivers attacks towards the end to secure third place in the competition.

The Grand Final featured both overseas teams with the Diamond Chiefs taking on the Esarn All Stars. Though the Chiefs were much fancied throughout the day, having built their game around physicality and a impressive defense, the All Stars had recovered from a opening round defeat to go unbeaten for the rest of the day, taking a victory against the Chiefs in the last round of the group stage. Riding on the the momentum of their previous win, Esarn looked to move the ball around the park early on and with their talisman Clements once again storming through the Chiefs defense with some aggressive carrying, they controlled most of the territory as the Chiefs struggled to get out of their own half. However, a strong defense by the Chiefs ensured that the All Stars weren’t able to fully capitalize on their territorial advantage and both sides went in at half time with one try apiece.

With the game finely balanced, it was the Chiefs who came out rejuvenated and took control of the game. Going into another gear and upping the intensity in their game, they spent the early parts of the second half camped on the All Stars try line, eventually powering over for the important first score after half time. With that, the extended period of pressure seemed to have finally taken a toll on the All Stars as straight from the restart a unclaimed ball bounced gratefully into the arms of the oncoming Chiefs player who galloped over the try line for a decisive score. From that moment on the Chiefs knew they had the game wrapped up as the All Stars failed to find the spark that had taken them this far. Further tries by both sides brought the final score to 25-8, the Diamonds Chiefs being crowned the first ever overseas winners for the HKRL 9s.

The MVP of the day was Nelis Tumae of the Diamond Chiefs whose consistency and leadership on the field epitomized the Chiefs winning edge. 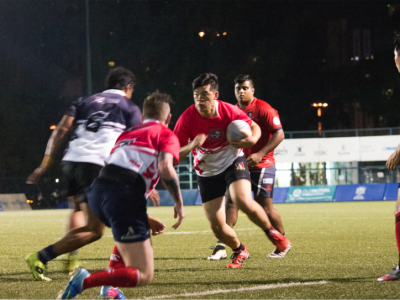